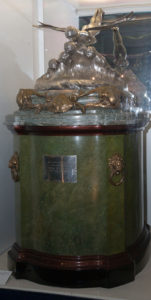 The Schneider Trophy, on display at the Science Museum, London
Photo credit: Mirio

The Trophy was posted in 1912 by M. Jacques Schneider, famed French sportsman, and maker of firearms.

The Schneider Trophy and a financial prize were posted to promote the development of seaplanes. Schneider felt that seaplanes offered a more cost-effective way to create air travel and commerce because nearly every city had either a coastline, river or lake, eliminating the need to construct expensive airfields that the land-based aircraft would need.

History of Races with pilot, aircraft and speed or laps

The trophy itself is an overwhelming object of art nouveau style. Designed by E. Garbard, it is a silver-plated casting of a woman with wings, the Spirit of Flight, kissing the waves in which appear four heads of young men: Neptune and three Tritons.

Want a small replica of this famous trophy for your office or home? Click here